What skills are required for technicians when using Augmented and Virtual Reality (AR&VR) applications in maintenance activities in the industry? This is the core question that we try to answer from the WCM Smart Maintenance Skills lab.

Based on several pilots at Stork and Kuehne & Nagel, we have evaluated how technicians deal with the interpretation and analysis of information provided for guidance and implementation of maintenance activities when applying VR & AR applications. The research shows that age, experience and education level are of great importance for mechanics in VR & AR applications in daily practice.

A complicating factor was the COVID 19 trouble that played a major role in the pilots’ implementation in recent months. The companies involved have a strict policy regarding carrying out activities in the workplace due to the Corona virus. With a modified approach, it has nevertheless been possible to conduct experiments with VR & AR, albeit modified. The Corona crisis has further emphasized the added value of AR & VR applications in maintenance.

Application of AR and VR in industry

In 2019, an exploratory study “Developing Maintenance Skills” was carried out by two students from the Industrial Engineering & Management program at Avans University of Applied Sciences into the application of AR and VR in the industry. In this project, Fujifilm, Tata Steel and Kuehne + Nagel investigated the impact of new technologies on mechanics and what skills they lack to apply the technology in the professional field. This study found that Augmented Reality (AR) is more commonly used in companies than Virtual Reality (VR), which is considered more suitable for training sessions than work performance. The companies involved see that their technicians (usually with secondary vocational education and 40+) are not familiar with data analysis techniques and reading more complex dashboards. AR applications have not yet started, as the technology is relatively expensive to purchase and does not yet provide sufficient added value. Most companies have started pilots to participate on a smaller scale 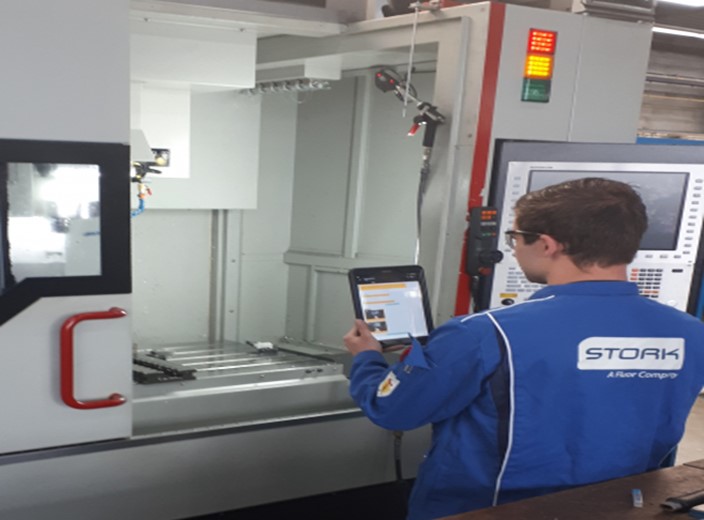 The first experiments with AR have been conducted based on exploratory research. The Fieldbit App was used for this. The research was carried out by three students from the Industrial Engineering & Management program at Avans University of Applied Sciences. A pilot has been conducted to observe how technicians from Stork and Kuehne + Nagel react to the use of the Fieldbit App. The Fieldbit App is an application that functions as a helpdesk. This app includes various functions such as chatting, video calling, photo camera, AR functions, etc. The pilot aimed to observe which skills the employees master and which they lack. To do this, a suitable scenario has been devised together with Actemium using the app in Actemium’s Skills lab. Unfortunately, this pilot could not be physically carried out due to circumstances of COVID-19. An alternative scenario has been devised to allow the tests to continue. The new scenario was carried out by telephone. That is why it was decided to set up a relatively simple scenario and focus on the functionalities within the Fieldbit App and not the scenario itself. The test related to a defective coffee machine.

Before the pilots, a survey was held among the technicians to see what knowledge they already have. These surveys show that almost all employees are already familiar with applications and use them in daily life. Half of the employees surveyed only know what AR & VR is, and only about 30% are aware of the skills that these technologies can offer. The vast majority of employees are willing to acquire knowledge in the future.

The test results showed that everyone, young and old, could successfully complete the entire scenario. The younger generation needed less guidance in carrying out the tasks and therefore took the initiative themselves to carry out steps. For the older technicians it proved more difficult, as they required longer to execute the scenario. They did not take the initiative to act themselves and were quickly afraid of doing it wrong. The difference in skill was clearly visible. This was also evident from the interviews that were held after the test. Based on this, three age categories were used to interpret the findings of the study further.

In conclusion, it can be stated that it is important to make younger technicians enthusiastic about the Fieldbit App in particular. If this young group of technicians can be made enthusiastic, they can positively influence older technicians within the organization. In addition, this creates a new culture within the organization. The more it is talked about, the sooner it will become accepted and a new normal. In general, experienced technicians are familiar with standard applications that many people use, but they are not aware of technological developments in AR & VR. We see that this group provides a lot of support for their current working methods, which feel familiar. Many mechanics gave the same constructive feedback, but were reluctant to speak about changes. It is therefore essential that the mechanics learn to innovate within this. The older technicians (50+) lack the vision of the (im)possibilities of AR & VR. They have only followed technological developments to a limited extent, and they have not formulated any objectives for the longer term. Training required in the field of technological developments is of great importance for these older technicians.

The COVID-19 crisis has shown that new working methods are urgently needed to carry out on-site maintenance with fewer technicians. From the WCM Skillslab, we want to pay extra attention to this. Two fourth-year students from the Industrial Engineering & Management program at Avans University of Applied Sciences have started designing a new AR & VR pilot, in which they focus on the use of the Hololens. The results will be reported shortly.

In addition to Stork, the following partners are involved: Actemium, Avans Hogeschool, Dimensys, Kuehne + Nagel Logistics BV and ROC Tilburg. The province of Noord Brabant supports the project through the ‘OP Zuid’ scheme. The project has a duration of 2 years and is expected to end in the course of 2021.

The Smart Maintenance Skillslab consists of 4 work packages. Stork contributes particularly in work package 1: “Experimenting in pilots”. Through various pilots in which new technologies are applied in the maintenance sector, companies learn what kind of people are needed, what skills, and how they can be deployed best.

Jack Doomernik is principal consultant at Stork Asset Management Technology and Subject Matter Expert on performance monitoring. In addition, he is professor in Smart Energy systems at Avans University of Applied Sciences in the Netherlands.

Come along in our journey of the Fieldlab' CAMINO': applying digital transformation and predictive maintenance on infrastructural objects and networks.