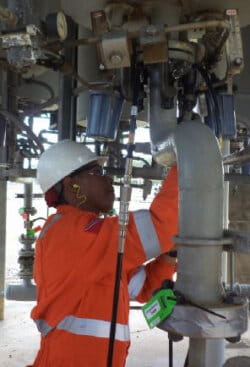 A client had corroded studbolts on live pressure vessel flanges in its onshore gas processing facility. The next planned shutdown was in 2016 and the client was concerned that the corroded bolts strength would degrade below the allowable limit before the shutdown.

Removing and replacing the bolts using traditional techniques would require a shutdown and loss of production at a significant financial cost.

Stork recommended that its patented Hot Bolt Clamp (HBC) technique be applied, allowing it to remove and replace the bolts while the plant was still in production. A team was mobilised and 35 live connections with four bolts were replaced with no disruption to ongoing production.