On a recent event hosted by the environmental agency DCMR in the Netherlands, various Project 6-25 partners presented their innovations that increase process efficiencies. The 6-25 program aims to reduce 6 million tons of industrial CO2 emissions by 2025. We had the pleasure of giving a presentation about our hybrid e-boiler system and its integration into (existing) steam-water cycles. During the presentation we received many question. We collected the top 5 questions asked and answer them in this blog.

Only a few of the questions received regarded the technology itself, probably because the technology itself is highly reliable and well-developed. E-boilers have been used in e.g. the Scandinavian countries for converting power to heat for decades already. Most questions actually centered around the economic feasibility of an e-boiler system and how to operate such a system. The top 5 questions:

1. Is it possible to replace a relatively slow fossil fuel-fired boiler with an electric boiler?

Yes, this is possible. An e-boiler can replace a fossil fuel-fired boiler completely. Although this will eliminate all CO2 emissions, most likely such a replacement will not be commercially feasible.  Therefore, an e-boiler often only replaces part of the capacity of the conventional boiler. Together, these boilers form a hybrid system. When the electricity price is sufficiently low, the e-boiler status is changed from hot standby to maximum steam output in 1-2 mins. Because the total steam demand is rather constant, the output of the conventional boiler needs to be lowered. Depending on the boiler and the turn-down ratio, this usually can be done rather quickly as well (1-5 mins). If needed, mitigation strategies can be used. This varies from moderating the ramp up/down speed to installing a steam accumulator. Balancing power input and steam demand is therefore possible. 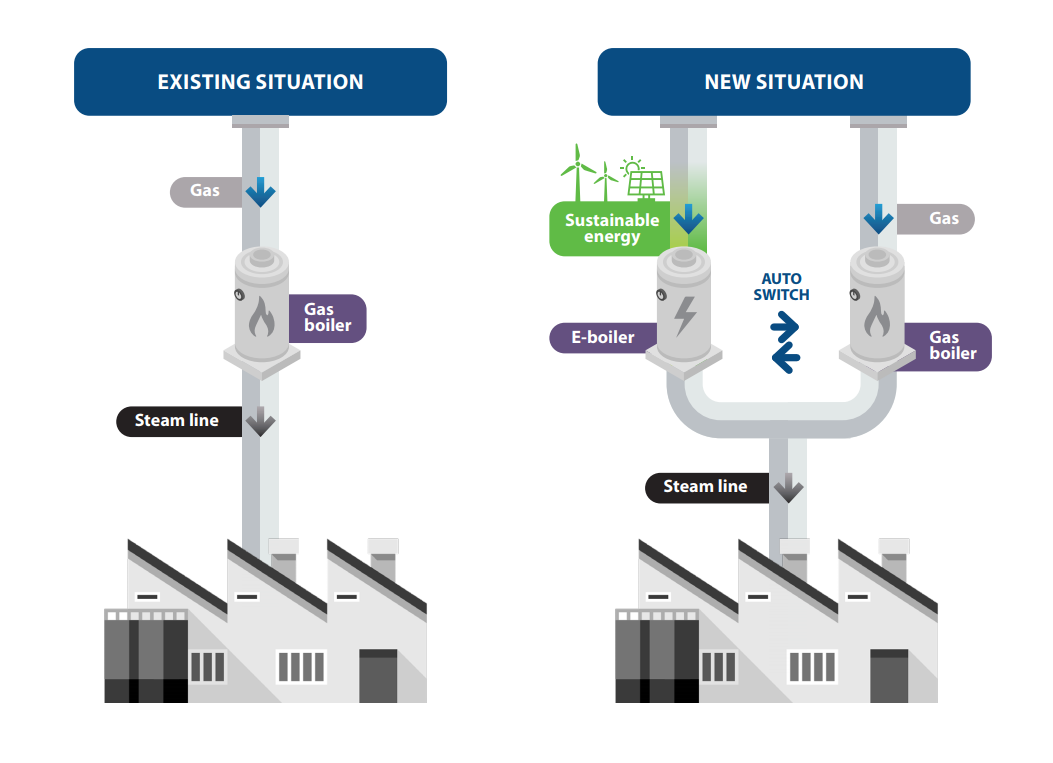 2. What mode of operation is used for e-boiler systems?

The mode of operation highly depends on a company's objectives and the type of industry. We have customers that want to operate on the intra-day and/or balancing electricity markets and consider the (stand-alone) e-boiler system as a means of making money. This requires ramping up/down the system very frequently for often very short periods (15 mins).

Other companies want to install an e-boiler system to meet CO2 and/or NOx emission regulations, or to have the desired (boiler) redundancy. This actually concerns most of the customers. For them, the incentive is thus different. They often operate on the forward and futures and/or day-ahead electricity markets. Because most of the time one MWh of electricity is (still) more expensive than one MWh of natural gas (or another fossil fuel), often a SDE++ subsidy is needed to make the business case feasible. However, price differences are declining, which increases the feasibility of an e-boiler system.

3. What is the Dutch SDE++ subsidy, and how does it work?

With the SDE++ subsidy, the Dutch government wants to stimulate sustainable energy production and the climate transition.

Applied to this technology: within certain limits, the SDE++ subsidy covers the difference between the cost price of one MWh of hot water or steam produced using an electric-powered boiler versus one MWh of hot water or steam using conventional boilers. In other words: the unprofitable part of the e-boiler will be subsidized by the government. Because the SDE++ is an operating subsidy, you will receive a subsidy during the operational period of your e-boiler project.

4. How many e-boiler systems have already been installed in the Netherlands?

For most customers, receiving an SDE++ subsidy is key for the feasibility of their e-boiler project. Applying for a SDE++ subsidy for e-boiler systems has only been possible since November 2020. This explains why only very few e-boiler systems are currently operational in The Netherlands. As far as we know, in The Hague an e-boiler is used in a heat network, and in the paper industry in Eerbeek an e-boiler is integrated into a combined heat and power plant. 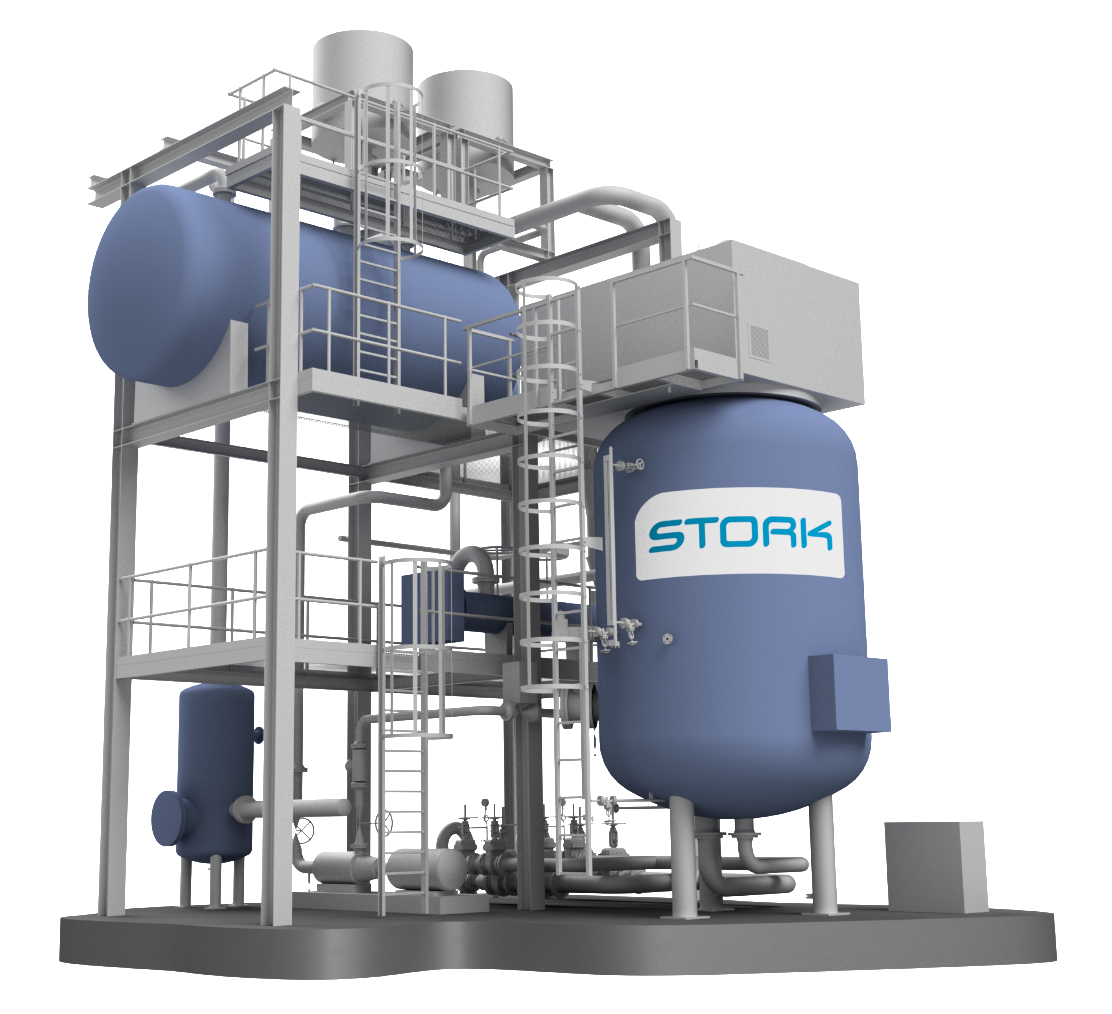 5. Does Stork also take care of the operating system needed for acting on the electricity market?

The software necessary to operate on the electricity market by ramping up/down the e-boiler system (either manually or automatically) is usually provided by specialized companies, or by customers themselves. Nevertheless, Stork Thermeq can team up with partners to take care of this part of a project as well.

Stork Thermeq is the exclusive partner for the implementation of Zeta e-boilers in the BeNeLux and the UK. Together with partners like Recoy, we help companies to build a detailed business case.

We are not just an e-boiler reseller. We go one step further, as we have the knowledge and expertise to deliver turn-key new e-boiler systems or e-boiler systems integrated into existing steam-water cycles.

We believe that in this way, we serve the customer best.

Sander Haase is team leader Technology & Innovation at Stork Thermeq. He is a research professional with a wide range of interests, having work experience in the chemical, dairy and process industry. He is a chemical process engineer by training and obtained a PhD at the University of Twente, studying transport near slippery interfaces – a topic at the interface of chemical engineering and fluid physics.