The equilibrium between gas dissolved in water and gas in steam is given by Raoult´s law. This law states that the ratio between the partial gas pressure in the steam and the product of the coefficient of activity and the concentration of the gas in the water at a given temperature is constant, if the gas in the steam fulfillls the condition P.V/T = constant, then:

Where:
Pg = the partial gas pressure in the steam
h = distribution coefficient
a = the coefficient of activity
Cg = the concentration of the gas in the water

At low, partial pressures, oxygen and carbon dioxide in steam behave according to the relationship P.V/T = constant.

The coefficient of activity is a measure for the deviation from the ideal behavior of the gas dissolved in water or, in other words, a measure for the interaction between the dissolved gas and the water. For oxygen the coefficient of activity is 1.0, if the concentration is smaller than 50 ppm. That of carbon dioxide greatly depends on the dissolved quantity of carbon dioxide and the chemical composition of the water.

The ratio constant h is determined by the kind of gas and the temperature. Table 1 shows the values of h for oxygen and carbon dioxide.

Table 1. Distribution coefficient h of oxygen and carbondioxide for water at different temperatures in bara/ppm.

Decrease of the partial gas pressure and/or increase of the temperature are not the only factors of importance in the deaeration process, since the transport velocity of the gas also plays a role. This velocity is determined by:

Diffusion of the gas in the water 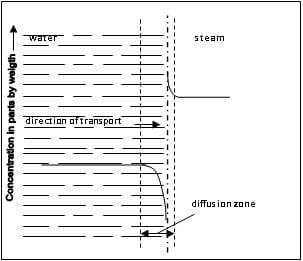 Fig. 2 Schematic display of gas concentration in the steam/water contact area with convection and diffusion.

Flow of water and steam

To ensure efficient deaeration it is necessary to make the transport route that the gas molecules have to travel by diffusion as short as possible. This can be achieved by formation of the water into very tiny droplets before the steam is passed through the water.

In the Stork deaerator the water is divided into droplets by means of a sprayer, which is regulated according to the volume of water to be sprayed. The droplet size remains constant at different throughputs. The droplets are passed through the steam compartment of the sprayer at high velocity and then impinge on the wall of this compartment, which causes the droplets to break up into even smaller droplets. The residence time of the water in the compartment is a few tenths of a second. Constant replacement of the steam in the steam compartment ensures that the partial gas pressure remains very low.

As the water droplets travel through the hotter steam, condensation occurs at the surface of the droplet, as a result of which the water is warmed up. This heating process proceeds very rapidly owing to the favorable ratio of contact surface to water volume. The temperature of the water cannot reach boiling point, since the surface tension furnishes an extra pressure.

The droplet surface acts like a tight elastic membrane, as a result of which the pressure on the concave side is higher than on the convex side. This extra pressure is 4 x O/D, where O is the surface tension of the water and D the diameter of the droplet. After the droplets have entered the steam compartment of the sprayer the partial gas pressure in the steam is very low with respect to the gas content of the water. This low, partial pressure and the reduced solubility owing to the temperature rise compel the gas to leave the water.

It is argued by some authors that the gas leaves the water due to the formation of gas bubbles in the droplets, but it is very doubtful that this could be the case. In order to maintain a gas bubble in a water droplet the sum of the partial pressures associated with the dissolved gases and the water vapor pressure must at least be equal to the pressure in the droplet plus the pressure caused by the interface of the water and the gas bubble. Hence, expressed as an inequality.

Pgases =    the sum of the partial pressure of the dissolved gases
PH2O =     the water vapor pressure; if the water temperature is equal to the steam temperature: PH2O = Psteam.
d =         the diameter of the gas bubble.

The difficulty of the formation of gas bubbles in droplets can be clearly illustrated with a bottle of soda-water. On opening the bottle gas bubbles are only formed on the wall. If gas-bubble formation is also seen to occur elsewhere in the soda-water, it can be taken for granted that a particle of some contaminating substance is suspended in the water. The formation of bubbles on the wall and on the particle is possible, because owing to the presence of an interface the nucleus-formation energy is much less there than elsewhere in the soda-water. As is evident from the example, no nucleus or bubble formation can taken place in a water droplet in the absence of an interface. On the strength of the foregoing it must be assumed, therefore, that the gas escapes solely by diffusion and/or flow.

Material transfer measurements performed in respect of falling drops of liquid in liquids that do not mix with the liquid of the droplets, have revealed that the transport of material from the droplets to the liquids takes place very quickly. This transport increases as the velocity of the droplets increases. There is no theoretical explanation for this fast transport. An explanation for this phenomenon on the strength of solid spheres is impossible, as the surfaces of the droplets are not rigid. The idea that a better transport of material is obtained by flow in the droplets is very attractive at first sight, but according to the literature this flow increases the rate of transport only by a factor of 2 or 3. Moreover, it is most improbable that flow occurs in such small droplets.

Another effect that might increase the rate of material transport from droplets is the agitation of the droplet’s surface by the medium flowing round it. This agitation chiefly occurs on the side of the droplet not facing the direction of flow owing to the eddies formed there by the surrounding medium.

However, if the transport in the droplet determines the material transport from the droplet, the high rate of transport cannot be ascribed to the agitation of the surface of the droplet.

It is thought that vibration of the droplets has a substantial effect, but it has not yet been possible to prove this with any certainty.

There is, in principle, no difference between the behavior of falling droplets in liquids and that of droplets moving in a steam space and therefore on the strength of the foregoing it must be concluded that droplet deaeration is subject to a theoretically unknown influence, of which we only observe the outcome. This effect is a higher rate of deaeration at a higher velocity of the droplets in the steam space.

A better deaeration effect is obtained by reducing the size of the water droplets. To give an impression of the effect of the droplet size, a derivation is given below for the deaeration rate of spherical droplets in which the transport of the gas molecules takes place exclusively by diffusion.

A diffusion process for which the concentration gradient is not constant can be represented by the following differential equation:

The solution of the differential equation is:

represents a function with

It is also possible to substitute for C, Cavg (= average concentration in the droplet at time t.) 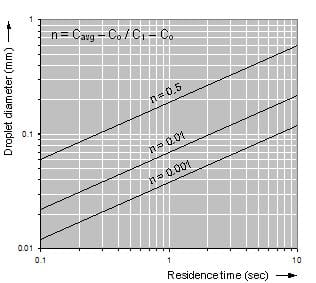 Fig. 3. Influence of droplet size on the rate of deaeration with diffusion only (Dv = 10-9m2/sec).

The functions (4) and (5) are known. With the aid of data from literature the relation between (Cavg – Co / C1 – Co), R and t is represented in figure 3. According to this figure the deaeration rate of the water increases with decreasing droplet size. For a deaerator this means that the greatest deaeration effect is attained in the stage in which the smallest droplets have formed.

The effect of the surface tension of the droplet

Reference is sometimes made to the effect of the surface tension of the droplet on the deaeration rate, the idea being that the surface tension retards the gas transport in the water droplets. The advocates of this theory recommend, therefore, that in order to attain a high deaeration rate the droplets should be allowed to form over and over again.

The repeated reformation of water droplets has a favorable effect on the deaeration process for another reason. By collecting the droplets in a reservoir and allowing them to reform, the concentration gradient in the droplets present before collection is averaged out. In the new droplets the optimum gas concentration occurs at the surface of the droplet, thus promoting a high deaeration rate.

It is known from practice that in the case of a cascade deaerator, for example, in which the droplets must be repeatedly reformed, the water is formed into films or jets instead of into droplets. The thickness of the films and jets increases accordingly as the throughout increases. Consequently, deaeration in a cascade type deaerator is less effective than with the use of a regulated sprayer. The reformation of films and jets has a great influence on the process in the cascade type deaerator. Despite the fact that in the Stork deaerator the water droplets are reformed only once, namely when impinging on the wall of the steam compartment of the sprayer, the deaeration effect at different through-outs is very large. The droplets produced by the sprayer and originating due to impingement are of such a size that deaeration takes place very rapidly.

The residence time of the water in the steam compartment of the sprayer is too short in some cases to ensure optimum deaeration and for this reason provision is made for post deaeration, which takes place in the water reservoir. The gas that has remained behind is expelled by conducting steam through the water by means of a steam rake.

With a pH lower than 4 the activity coefficient of the total carbon dioxide dissolved in water is set at 1.0; with higher pH values the coefficient is smaller. Owing to the interaction with the water the dissolved carbon dioxide manifests itself not only as CO2, but also in the form of H2CO3 and the ions HCO3 and CO3 2-. The equilibria formulae are:

As the quantity of H2CO3, in comparison with that of the ions, is negligibly small, the equilibria (6) and (7) can be combined as follows:

With the aid of the equilibrium constants it is possible to calculate the ratios, at a given temperature, of the quantities of CO2, HCOˉ3 and CO32- with respect to the total dissolved quantity of carbon dioxide. In figure 9 these ratios at 25oC are graphically represented as a function of the acid value.

This graph was drawn up on the assumption that no other substances than CO2 were dissolved in the water. At temperatures above 25oC the curves in figure 4 shift a little to the left. 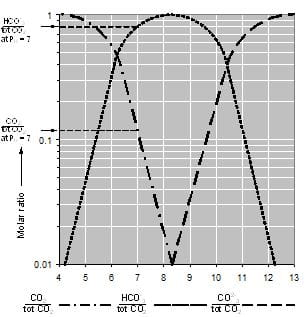 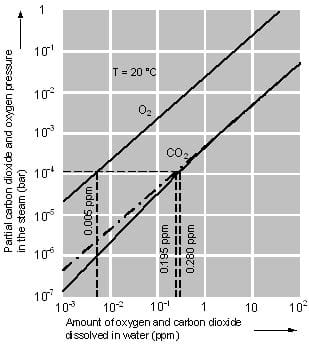 The lowering of the total carbon dioxide content to very low values cannot be achieved with a deaerator. To attain pressures in the steam are essential and these are hard or impossible to realize. Owing to the lack of data it is impossible to give a diagram as shown in figure 10 also at 100 °C. On the strength of the data mentioned in the present article, however, it can be predicted that the removal of carbon dioxide will be easier at temperatures above 20 °C.